Jason Zweig featured this data in his article, When Your Neighbors Move In to Your Investment Portfolio, for The Wall Street Journal.

Since 2013, advisors have been using the Risk Number® to quantify risk and empower fearless investing for their clients. When we decided to look deeper into Risk Number data, we had some questions about what we’d find: what kind of patterns would emerge city by city, or state by state? Would there be other differences we couldn't quantify? What if we've done all this scientific research and risk really is just the same old semantics? [spoiler: it's not] 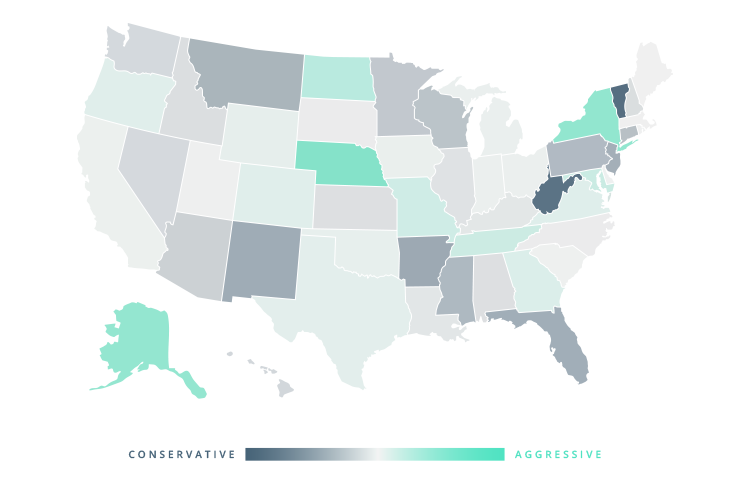 The average Risk Number by state ranges from as low as 52.86 to as high as 62.25, and we applied a multiplier to assign an extrapolated Risk Number to every state for illustrative purposes. The results were fascinating, and we're excited to finally share it with you.

Here's what we found:

At first glance, these states could not be any more different. Geographically, they’re almost perfectly west, east, and center. So what makes these states so similar in their propensity for risk? Age could be one of those factors.

The three least-risky states have some similarities, but some striking differences as well. Arkansas and West Virginia have two of the lowest median household incomes in the country and large mining communities, but Vermont’s median income is on par with some of the more risky states. How can that be?

We collected this data over seven years and are still discovering just how many outside factors contribute to an investor's Risk Number. Risk tolerance is such a multivariable dynamic that placing investors into subjective buckets based on their age simply doesn't cut it.

We believe investors are individuals, and our research has confirmed that belief time and time again.

So, how risky is your state?