In April 2013 I was heckled while on stage at an advisor conference as I demoed the Riskalyze Interest Rate Stress Test feature.

As a part of my demo I suggested an advisor may want to stress test a given portfolio (prospective client or existing client) by assuming a 100 basis point rise in the 10 Year US gov bond yield over the next 6 months.  As I demoed the impact of a rising interest rate environment I was interrupted by passionate advisors in attendance.

“Interest rates don’t move like that!” one advisor shouted.  “How about something more reasonable!?” shouted another. Perhaps the most prudent question thrown my way was  “Why does Riskalyze assume a flat interest rate environment as consensus, anyways?”

Out of the box Riskalyze works with a “long term consensus data model” which establishes the direction (up or down) and magnitude (how much) change on “the stock market” and “the bond market.” The Riskalyze default data model (a.k.a. “Long Term Consensus”) return expectation for interest rate sensitive investments assumes a “flat” interest rate environment.

Monetary policy, economic growth rates, and other data points could be used to support a myriad of different ‘consensus’ views on interest rates. We constantly review and reserve the right to update the consensus inputs.

Throughout 2014 we have read more and more analysis pointing to a rising interest environment.  We certainly accept that interest rates could (should?) be rising as monetary policy shifts to a less manipulative stance and the economy gains traction. On the other hand, one has to believe that monetary policy will allow interest rates to rise (at great expense to economic growth and interest expense to debt laden governments) and that economic growth is actually strengthening.   Rather than choose a side we have opted to model a “flat” interest rate environment in the “Long Term Consensus” data model.

As I reviewed our consensus stance today I came across a GREAT data point on Marketwatch noting that 100% of economists were wrong about the direction/magnitude of change on the 10 Year US Gov bond yield over the past 6 months. 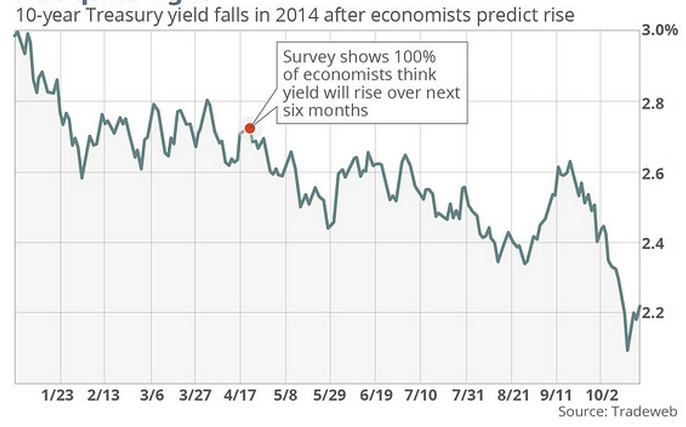 Though this data point is a bit anecdotal, it helps us express why we don’t attach our consensus data model to subjective surveys and why we continue to model a “flat” interest rate environment in our default data model.