Below is the May edition of the Fintech Report Card, a monthly piece by Riskalyze CEO Aaron Klein originally published in WealthManagement.com. 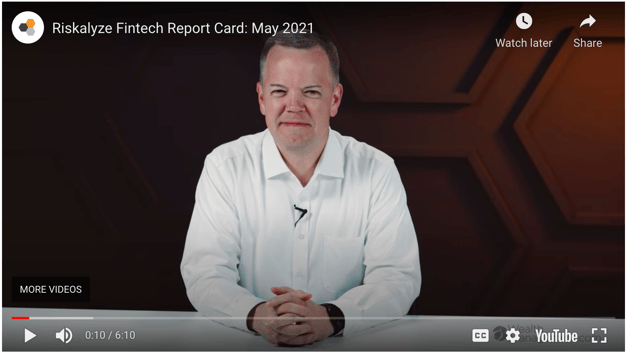 Why it matters: In a matter of months, InvestCloud has transformed itself from a ‘really cool advisor and client dashboard / data integration play’ into a hardcore contender for ‘unified wealth management platform of the future.’ Tegra118 brought blue-chip back office clients leveraging industrial-grade trading technology; Finantix brought banking capabilities and now Advicent brings one of the more visible financial planning tools, with an installed base of enterprise clients, into the mix. It’ll be fascinating to see what John Wise and team have up their sleeves next.

What happened: Fidelity is launching a new dashboard to give its advisors insight into the connectivity, data flows, and digital certificates used by their third-party technology solutions.

Why it matters: Fidelity is continuing a trend in the industry to make data more transparent and accessible for advisory firms. When a firm controls its data, it better controls its own workflows and ability to maintain service levels. It may not be a sexy update, but it’s a necessary one to help advisors continue to mature their operational processes.

What happened: Billionaire Mark Cuban and Creative Planning CEO Peter Mallouk just turned a Twitter scuffle into a series of stock market bets that stack up to a whopping $2M. In one bet, Cuban is taking Amazon and Netflix 50/50 while Mallouk takes the S&P 500. The executive with the lower-performing portfolio in ten years will give $1 million to the winner’s chosen charity.

Why it matters: It’s fascinating to see how social media creates connections and conversations that might not otherwise happen. This is a high stakes bet, and it doesn’t take a rocket scientist to see who has the higher Risk Number. We’ll have to wait 10 years to find out who’s right, so set your calendar reminders now!

What happened: Snappy Kraken announced it raised $6 million in a Series A funding round led by FINTOP Capital.

Why it matters: There’s a tremendous amount of capital being invested in wealthtech for the benefit of advisors right now, and Snappy Kraken’s fuel-up emphasizes how important marketing has become for advisory firms. The days of relying on client referrals alone seem to be over; in its place are robust digital marketing strategies like email newsletters and advertisements. I’m excited to see the next wave of Snappy’s technology innovation roll out!

Disclosure: I’m a member of Snappy Kraken’s Board of Directors.

What happened: FMG Suite, a marketing automation solution for advisors, announced new capabilities to support the SEC’s updated marketing rule, including the ability to add Google Reviews and client testimonials to advisor websites.

Why it matters: Marketing for advisors is getting a much-needed facelift now that the SEC’s advertising rule updates have gone into effect. The effort to create good content, however, still is on the shoulders of advisors. This update from FMG Suite should make it easier for them to improve their websites with the flexibility the rule update now allows.

Vise Gets Another Big Funding Round

What happened: AI-driven portfolio management startup Vise announced the completion of a $65 million Series C funding round with a post-money valuation of $1 billion. The company has now raised a total of $125 million.

Why it matters: Well, that $1 billion valuation certainly got a blaring headline. After all, Envestnet is one of the most dominant firms in the industry and has a valuation of about $3.75 billion after 20 years of hard work. Keep in mind that venture capital valuations involve preferred shares, and we don’t really know the structure of this deal, but no matter how you slice it, investors have made a big bet that Vise can build itself into something much larger than it is today. Congratulations to Samir, Runik and team!