Below is the June edition of the Fintech Report Card, a monthly piece by Riskalyze CEO Aaron Klein originally published in WealthManagement.com. 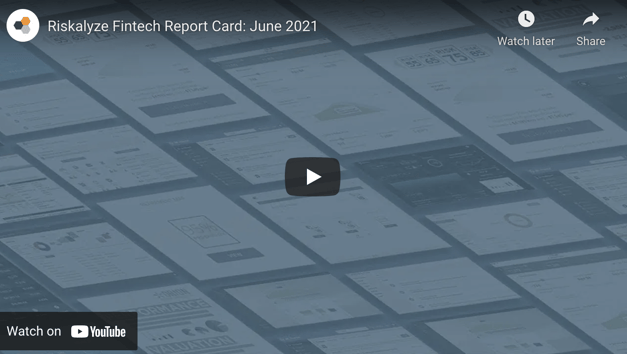 What happened: Principal Financial Group, which acquired the digital advice startup in 2018, announced a “strategic business decision” to close RobustWealth for advisors this September.

Why it matters: RobustWealth was very focused on the advisor space, and it seemed like the goal was for Principal to gain a stronger foothold for advisor distribution of its financial products and solutions. This about-face means either that initiative didn’t hit the mark, or the original intent was to use RobustWealth’s technology for a Principal direct-to-consumer offering. At least they gave advisors a lengthy heads-up. It’ll be interesting to see how they leverage the technology going forward.

What happened: Pershing is launching NetXServices, an API-centric approach to connecting with Pershing data and technical support for its vendor and developer partners.

Why it matters: This is a really exciting development for Pershing’s technology team, which has picked up speed and cachet over the last couple of years. Considering your APIs and data to be a core part of your product offering is step one to delivering next-generation capabilities we haven’t seen from Pershing yet. We can’t wait to see more detail on this initiative, and congrats to the Pershing team.

What happened: Commonwealth took their custom-made advisor platform and decided to spin it off as a software company called Advisor360 in 2019, announcing MassMutual as its first outside client. MassMutual has now rolled A360 out to their advisor base, some two years later.

Why it matters: Advisor360 is effectively competing for the “platform” space currently shared by Envestnet, Orion and Black Diamond, with up-and-comers like InvestCloud and Addepar in the mix. Getting the technology deployed out to the second firm is a key milestone that will help A360 prove its bona fides to wealth management enterprises across the space.

What happened: Apex announced plans to offer its clients the elimination of the two-day settlement period for trades. Individual client firms can elect whether to extend the feature to their investor accounts.

Why it matters: We live in an instant society. When we want food, GrubHub has it to the door in under half an hour. When we want a TV show, Netflix has it available immediately. In a world of instant gratification, why would we wait around two days for a view of what we own in our investment accounts?

Why it matters: Skience, traditionally seen as a Salesforce consulting firm, has been making intentional and direct moves to position itself as a product-first software platform since hiring Albridge’s Marc Butler as COO last year. This latest move positions the company as an option for advisory firms who want a single back-office solution for their operations, sales, and advice teams. Meanwhile, their competition isn’t sitting still.

Why it matters: David Knoch was president at 1st Global, a tax-centric broker/dealer, and helped build a game-changing front-to-back office solution at that firm, leading to its acquisition by Blucora, which has since combined it with HD Vest and rebranded the business Avantax Wealth. Then right before the pandemic hit, he took his expertise as a Docupace client and became the freshly-minted CEO of that firm. From rebuilding his management team to executing on his first big strategic merger, Knoch has turned Docupace into a business to watch.

Why it matters: Interest in crypto among consumers is skyrocketing, but advisors haven’t had a simple way to view or advise on digital assets because they are so far outside the traditional investment scope. Onramp aims to make that access easy and act like a Plaid for the crypto space. This first integration is a natural place to begin, because it puts crypto right where Onramp believes it belongs—side by side with all the rest of a client’s assets. It’s still early, but Onramp’s CEO Tyrone Ross has shown he knows how to generate excitement and a committed following.

What happened: Altruist landed an incredible $50 million Series B funding round, which fascinatingly, was led by Vanguard, the index fund and hybrid advice innovator.

Why it matters: This latest raise, and Vanguard’s prominent place in it, has piqued interest about Altruist’s strategic direction. What initially was presented as a digital-first custodian now looks a bit more like a tech-integrated TAMP with custom-built portfolio management and trading technology. Either way, the firm’s ads are touting it as a “replacement for your custodian,” so it’ll be interesting to see how this battle shapes up. Altruist hasn’t released numbers like AUM or how many advisors it serves. Can it deliver? It’s tough to bet against a determined and successful entrepreneur like CEO Jason Wenk.

What happened: Independent RIA custodian TradePMR announced an improved digital account transfer tool. Its purpose is to simplify the transition process for RIAs and breakaway brokers.

Why it matters: Advisor transitions are happening at a record pace; the first quarter of 2021 saw more advisors move firms than any previously. Moving a book of business has never been an easy task, though, and those transitions are often painful. There are multiple companies trying to solve this problem right now (we covered Skience’s Advisor Transitions recently), but it’s a great move by TradePMR to drive business to their firm.