Below is the July edition of the Fintech Report Card, a monthly piece by Riskalyze CEO Aaron Klein originally published in WealthManagement.com. 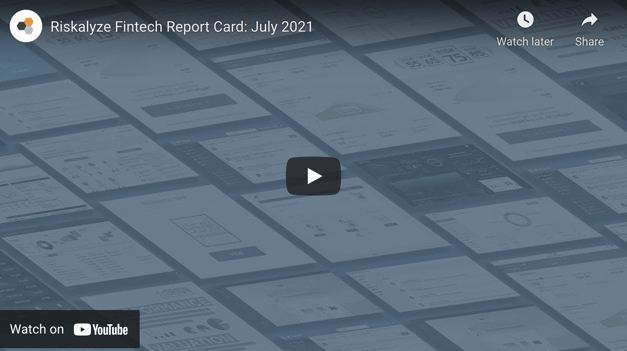 What happened: Schwab announced it is taking a $200 million charge due to an expected fine or restitution order from the SEC because of its Schwab Intelligent Portfolios self-directed investing service.

Why it matters: Wow, I did not see this coming—but the SEC is looking into how Schwab handled disclosures around its self-directed investing service with automated portfolios. Speculation abounds it may have been the heavy cash allocations, which paid the way for the service to advertise “zero advisory fees” in contrast with its competition. Indirect fees are a big deal to the SEC; good disclosure is the name of the game, and it looks like Schwab is preparing for the mother of all penalties for not getting that right.

AssetMark Closes on Acquisition of Voyant

What happened: AssetMark announced that it has completed its acquisition of Voyant, a financial planning software solution with a global footprint. The deal is for $145 million in cash and AssetMark’s common stock.

Why it matters: Move over, Envestnet MoneyGuide and eMoney...there’s a new player in town who aims to make its mark on US advisors. I’ll confess that I hadn’t heard of Voyant, an Austin, Texas based financial planning software firm, prior to AssetMark’s $145 million acquisition. That’s largely because they have almost zero US presence and are largely an enterprise player outside of the US—but with an impressive client roster there.

With the changing of the guard in leadership—longtime AssetMark executive Natalie Wolfsen took the helm this past March—AssetMark’s deal for Voyant has all the signs of a company on the move. They’ve built a loyal following of advisors and strong partnerships with broker-dealers and RIAs, and there looks to be a lot of upside ahead for these firms.

What happened: CircleBlack has revamped the user interface for its portfolio management and performance reporting software, with a goal of improving its usage among enterprise organizations.

Why it matters: After the untimely passing of its founder, John Michel, CircleBlack is showing its clients that it is back in the game as new CEO Alex Sauickie unveils the first new product launch of his tenure. It’ll be exciting to see how the new experience is received by clients, and how its integration plans continue to unfold.

Envestnet Shares Its Goals for 2021—and Beyond

What happened: During its 2021 Advisor Summit, Envestnet shared that it plans to focus its product development on more deeply integrating its financial planning, insurance, lending, and estate planning services with each other.

Why it matters: As a titan of advisor technology, where Envestnet goes the rest of the industry tends to go as well. Financial planning is the obvious leader here, but what’s interesting to note is their increasing focus on “exchanges” to deliver products like lending and insurance that fee-based advisors have traditionally shied away from. With new fee-based versions of these services, “comprehensive” financial advice is taking a big step forward.

What happened: JPMorgan Chase & Co. will acquire OpenInvest, a financial-technology firm that offers custom SMAs and model portfolios with an ESG lens.

Why it matters: Jamie Dimon famously declared that he was accepting inbound calls from asset management firms in fintech. After its acquisition of 55ip, which specialized in tax-efficient models, JPMorgan followed that up with an ESG play with OpenInvest. One surprise was the speed with which OpenInvest then announced it was sunsetting its services for advisors—apparently JPM is planning on making this a proprietary offering just for its own private wealth and banking clients.

The good news? There are a lot of other ESG offerings chasing advisor assets. Now they’ve just got to solve the primary problem—that we’re a divided nation with a wide spectrum of beliefs and values, and “ESG” means a lot of different things to different people.

Why it matters: Kannady was VP of user experience and product development at Envestnet, and that expertise will be critical in bringing together and unifying a family of products that have only recently been unified under the Intelliflo brand. Is Invesco planning to make a run at Envestnet’s dominance in the space? It certainly validates Bill Crager’s view that “everyone wants to be Envestnet.”

What happened: Broadridge Financial Solutions announced the acquisition of AdvisorStream, a marketing automation company for advisors.

Why it matters: The marketing space has been a hot one for acquisitions, what with TwentyOverTen being acquired by FMGSuite, and now AdvisorStream being acquired by Broadridge. It’s definitely interesting to watch the collection of assets that Wealth Management CEO Michael Alexander is pulling together under the Broadridge umbrella.

Disclosure: I sit on the Board of Directors of Snappy Kraken, an AdvisorStream competitor.

Robinhood Gets Hit with $70 Million Fine

What happened: FINRA ordered Robinhood to pay $70 million for significant supervisory failures and harm to its customers.

Why it matters: Ah, Robinhood. You combine such a beautiful mobile app with a penchant for innovation, but this action by FINRA is a reminder that fintech is a place where the old motto “move fast and break things” can’t always apply. With the lion’s share of their revenue made up of “payment for order flow” and other indirect fees, expect FINRA and the SEC to continue questioning whether the app should keep its name, or be renamed the Sheriff of Nottingham.